Do You Have To Be Shy To Be A Good Writer? 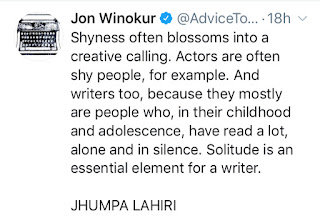 Shyness often blossoms into a creative calling. Actors are often shy people [...] And writers too, because they mostly are people who, in their childhood and adolescence, have read a lot, alone and in silence. Solitude is an essential element for a writer.

And Joe Moran wrote in The Daily Beast article "Do Shy People Make the Best Writers?":

Nicholson Baker, Alan Bennett, Joan Didion, David Foster Wallace, J.K. Rowling, and Garrison Keillor are just a few of the contemporary authors who have written or spoken about being shy.

Lahiri's use of the word "often" shows that she's not implying that all shy people blossom into a creative calling.

And if you don't believe that "[a]ctors are often shy people". Here's the title of an article Dalya Alberge wrote for The Guardian: "‘It feels like I’m choking’ – actors reveal crippling effects of stage fright" The irony!

Coincidentally, I'm a writer, and I was an avid reader - alone and in silence during my childhood and adolescence. But does that make me a good writer? Probably not.