After reading Nassim Taleb's post on Facebook about how, "... many many social "scientists" are much worse..." than Gladwell and having read Christopher F. Chabris' Wall Street Journal review of Gladwell's David and Goliath, I was hesitant about going to hear Gladwell speak at the Union Square Barnes & Noble last Thursday night.  However, I'm happy that I went.

Gladwell opened by mentioning that three people came to his very first book signing, and was pleasantly surprised to see such a large crowd awaiting his arrival. I was roped off and segregated with a crowd of people who didn't have a book to be signed behind a larger crowd of people who had hardcovers. (One consequence of the proliferation of ebooks is that a number of them can be downloaded for free. For example, the torrent for the ebook and audio book for David and Goliath is on the Internet.)

After giving the example of the Viet Cong, Gladwell summarized David and Goliath by saying that what is in one's heart is the most important element in winning a battle or overcoming an obstacle i.e., a Goliath. 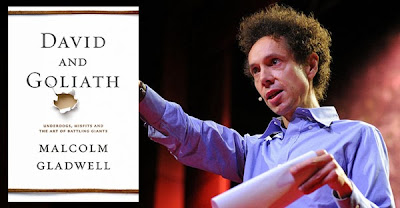 Posted by Mo Ibrahim at 5:10 PM No comments:

PHILIP GOES FORTH @ the Mint Theater

After seeing the controversial Balthus exhibits last weekend at the Gagosian and the MET, I saw George Kelly's inspiring Philip Goes Forth yesterday at the Mint theater. The play is about Philip, an aspiring playwright, who wants to move to New York City to write plays; however, Philip's father wants him to continue working in the family business.The question becomes, does Philip really want to write plays for the rest of his life or does he only desire to defy his father.

George Kelly makes it clear that if an aspiring artist isn't sincere, then he or she won't be able to endure the arduous process of writing for hours, editing for more hours, fielding rejections, etc. And that if the "artist" finds more pleasure in eating than working on his creative project, then he probably won't "make it" in the Big Apple.