ELODEA CANADENSIS (American or Canadian Pondweed) Under a Microscope!

I remember viewing a leaf of Elodea canadensis (i.e., American or Canadian waterweed or pondweed) umpteen years ago under a microscope in an undergraduate science class, and it still blows me away.
Posted by Mo Ibrahim at 6:38 PM No comments:

Email ThisBlogThis!Share to TwitterShare to FacebookShare to Pinterest
Labels: science

I saw the Julio Le Parc 1959 exhibit at The Met Breuer two days before it closed, and it was (arguably) the best (abstract minimalist) exhibit that I've viewed.

What initially appeared to be patternless pieces, upon closer inspection, were discovered to be creatively and painstakingly patterned in clean colors or in black or white.

For example, in Quantitative Sequences [Séquences Quantitatives], Le Parc started with an empty square and filled it and emptied it, one block at a time, until the end of the piece. 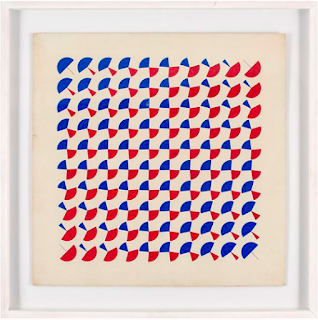 And in Mutation of Forms [Mutación de Formas], Le Parc opened and closed a red and blue "umbrella" from the beginning to the end of the gouache on cardboard piece.

The Un-Importance of Book Cover Designs

John Williams' New York Times cover story How a Book Gets to the Perfect Cover: Here’s how designers get a concept from good to must-pick-up explains how the cover for Glen David Gold’s I Will Be Complete evolved. The memoir:

"[...] is nearly 500 pages, and recounts his 20s, his college years and his event-filled youth after his mother moved to New York and left him, at 12, temporarily alone in her San Francisco apartment. The length of the book, and the amount of ground it covers, made the prospect of designing a cover for it “a little intimidating,” said Tyler Comrie, a senior designer at Knopf who was given the task.

“There’s a part in the book where Glen stumbles on a puberty chart, when he was 14 or so,” Comrie said. “This presented a perfect opportunity: Three different stages of his life, all tied together with this thing he finds in the book and causes a lot of self-reflection [...]

Tyler Comrie developed over three drafts (Figure: 1) for I Will Be Complete, but in the end, a work of abstract by Andrew Nilsen, a friend of the author, was chosen for the cover (Figure 2).

Ultimately, the book's title and summary are going to help the reader make the ultimate decision to buy (and possibly read) the book. An author, like Tim Ferris, can have a book cover design contest, but no matter how attractive the cover, (most) readers aren't going to read a book solely based on the book cover design.
Posted by Mo Ibrahim at 5:40 PM No comments: