LOL: Laughing Out Loud While Reading 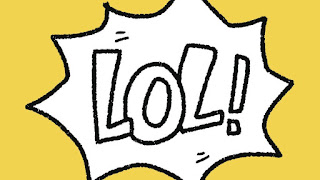 To assist with an ongoing project, I recently re-read Nabokov's Laughter in the Dark and I'm almost done re-reading Look at the Harlequins! and I don't recall the novels being as funny the first time that I read them. There were a lot moments in the books that made me smile, which I marked in the margins with a lonely LOL, but there are other moments where the acronym gets an accompanying exclamation point that indicates that I literally laughed out loud - on the subway.

Here's an example of a LOL where Albinus and Margot are frolicking at the beach:

He splashed in after her. She turned toward him, laughing, spitting, wiping the wet hair from her eyes. He attempted to duck her, then caught her by the ankle and she kicked and screamed. An Englishwoman who was lolling in a deck-chair beneath a mauve sunshade reading Punch turned to her husband, a red-faced, white-hatted man squatting on the sand, and said:

“Look at that German romping about with his daughter. Now, don’t be so lazy, William. Take the children out for a good swim.” p114

But here are two examples of LOL! moments:

In this scene, Albinus suspects that Paul knows about the affair.

She was cuddled in a corner of the sofa, relating slowly and minutely the plot of a play which she had seen. Her pale eyes with the faint freckles under them were as candid as her mother’s had been, and her unpowdered nose shone pathetically. Paul nodded his head and smiled. She might have been speaking Russian for all he knew. Then suddenly, and for one second only, he caught sight of Albinus’ eyes looking at him over the book he was holding. p 73

Here's a bit of advice that Rex shared with the couple:

“One can’t build up one’s life on the quick-sands of misfortune,” Rex had said to him. “That is a sin against life. I once had a friend who was a sculptor and whose unerring appreciation of form was almost uncanny. Then, all of a sudden, out of pity he married an ugly, elderly hunchback. I don’t know exactly what happened, but one day, soon after their marriage, they packed two little suitcases, one for each, and went on foot to the nearest lunatic asylum. In my opinion, an artist must let himself be guided solely by his sense of beauty: that will never deceive him.” p 181

And this was a LOL! moment for me in Look at the Harlequins!:

I might have been displeased by the tolerance she showed Basilevski (knowing none of his works and only vaguely aware of his preposterous reputation) had it not occurred to me that the theme of her sympathy was repeating, as it were, the friendly phase of my own initial relations with that faux bonhomme. From behind a more or less Doric column I overheard him asking my naive gentle Annette had she any idea why I hated so fiercely Gorki (for whom he cultivated total veneration). Was it because I resented the world fame of a proletarian? Had I really read any of that wonderful writer's books? Annette had looked puzzled but all at once a charming childish smile illumined her whole face and she recalled The Mother, a corny Soviet film that I had criticized, she said, "because the tears rolling down the faces were too big and too slow."

By the way, there's a copy of the 1969 film adaption of Laughter in the Dark on Archives.org.

Posted by Mo Ibrahim at 3:59 PM No comments:

Over 50,000 Fiction Books Published Per Year in the US!

Here's an excerpt from what Matthew Wilkens posted on Post45 in a post titled “Contemporary Fiction by the Numbers”:


“There are a lot of books published in the U.S. every year. Hundreds of thousands; millions, if you count print-on-demand and other “non-traditional” titles. Restricting our interest to fiction, the number is still around 50,000 and growing rapidly (see figure 1). And that’s just in the United States.


Fifty thousand new novels in the U.S. every year. We read a couple dozen, see reviews of maybe that many again, and so could claim to know something about roughly 0.1% of the total. Even that might be (barely) useful if it were randomly distributed, but of course it’s not; it’s by and large the thousandth that the major publishing houses have decided to support with ad buys, review placement, book tours, and publicity packages. We have no reason to believe that it’s a representative slice of the industry’s output.”


Most serious among these is the mounting disparity between the number of books we read (or, more inclusively, the objects we study) and the number produced. This gap is now large enough (and has been for decades) that it’s exceedingly difficult to say with any certainty what contemporary cultural production as a whole looks like.


[T]he fact that we have read, seen, and heard so little of that production is a serious problem.


As a reader and researcher, one has to agree with Wilkens and be deeply concerned with the number of books that you’re not privy to benefiting from their contents. However, I’ve always been content with the number of books that I’ve sold, but now I’m elated to know that I’ve sold any books with the amount of competition that’s produced every year. And that’s with little to know marketing support from a publisher.

Lastly, I would disagree with The Paris Review’s solution to this problem, which is to give up reading. Dan Piepenbring inconceivably posted:


When you’re considering which book to read next, remember this: you don’t have to read anything. You might, in fact, find it considerably more pleasurable to read nothing.
Posted by Mo Ibrahim at 4:54 PM No comments: 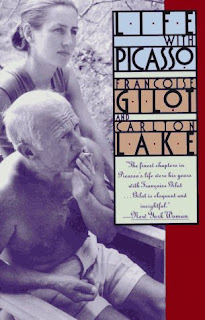 While I was living in a hotel in Brooklyn over the summer I ordered Life with Picasso - three times. The book was "unaccepted" the first time. Upon the second delivery, it was placed in a mailbox that the concierge said didn't exist. I finally had it shipped to my apartment and passed to me at a cafe in Chinatown.

Due to all of the difficulties that I had in receiving the book, I anticipated that it would have a some inspiring gems. I was correct. Here are some excerpts that (indirectly) deal with writing and some that describes Picasso's work ethic:

But I knew that an artist draws from his direct experience of life whatever quality of vision he brings to his work [...].

What interests me is to set up what you might call the rapports de grand écart - the most unexpected relationship possible between the things I want to speak about, because there is a certain difficulty in establishing the relationships in just that way, and in that difficulty there is an interest, and in that interest there's a certain tension and for me that tension is a lot more important than the stable equilibrium of harmony, which doesn't exist for me at all.

"Precisely because every writer and every artist is an anti-social being. He's not that way because he wants to be; he can't be any other way."

"You're very gifted for drawing [but] I think you should keep working -hard- every day."

When Matissee, due to an operation, was bedridden for twenty-two to twenty-three hours per day "He told us that often he worked by having paper attached to the ceiling and drawing on it, as he lay in bed, with charcoal tied to the end of a bamboo stick."

He stood before the canvas for three or four hours at a stretch. He made almost no superfluous gestures. I asked him if it didn't tire him to stand so long in one spot. He shook his head [...] After taking a seat he would[...]stay there studying the painting without speaking for as long as an hour[...]He worked like that from two in the afternoon until eleven in the evening before stopping to eat [...] And then, with a brief stop for dinner, nothing but painting until two in the morning. At two in the morning he was as fresh as a rose. But the next morning it would begin all over again.'

It occurred to me one day that it might be a good idea to polish the pottery with milk. Pablo dipped a rag in milk and rubbed some of his unglazed plates for hours until he finally got the effect he was after. 186

Picasso went to the Louvre approximately once per month to study Eugène Delacroix's The Women of Algiers.

Posted by Mo Ibrahim at 1:04 PM No comments: