Was Shakespeare a Woman? 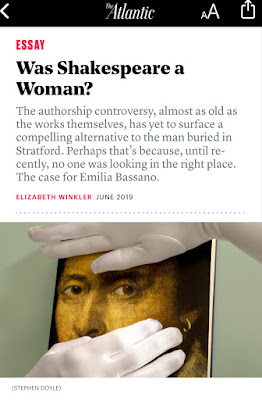 In her June 2019 Atlantic essay, Elizabeth Winkler asked "Was Shakespeare a Woman?" I won't get into the reasons that Winkler gave for Emilia Bassano possibly being the real Shakespeare, but I'm going to share her reasons for why Shakespeare possibly wasn't Shakespeare.

Their doubt is rooted in an empirical conundrum. Shakespeare’s life is remarkably well documented, by the standards of the period—yet no records from his lifetime identify him unequivocally as a writer. The more than 70 documents that exist show him as an actor, a shareholder in a theater company, a moneylender, and a property investor. They show that he dodged taxes, was fined for hoarding grain during a shortage, pursued petty lawsuits, and was subject to a restraining order. The profile is remarkably coherent, adding up to a mercenary impresario of the Renaissance entertainment industry. What’s missing is any sign that he wrote.

No such void exists for other major writers of the period, as a meticulous scholar named Diana Price has demonstrated. Many left fewer documents than Shakespeare did, but among them are manuscripts, letters, and payment records proving that writing was their profession.

A wealthy man when he retired to Stratford, he was meticulous about bequeathing his properties and possessions (his silver, his second-best bed). Yet he left behind not a single book, though the plays draw on hundreds of texts, including some—in Italian and French—that hadn’t yet been translated into English. Nor did he leave any musical instruments, though the plays use at least 300 musical terms and refer to 26 instruments. He remembered three actor-owners in his company, but no one in the literary profession. Strangest of all, he made no mention of manuscripts or writing.

Posted by Mo Ibrahim at 7:38 PM No comments: