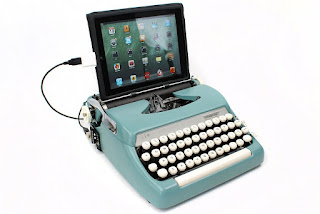 I was looking for the outline of my unpublished and (allegedly) stolen children's book when I stumbled upon the over 600 page and over 91,000 word MS of The Role Model, my first (unpublished) novel.

I was informed by a representative of the Volunteer Lawyers for the Arts that they couldn't pursue my case, because I had exceeded that statute of limitations, but I did get "Yes Dear!" out of the ordeal, which I published in The Poet.

The Poet took a stab at writing a novel
that didn’t sell well. Though, it was quite artful.

Then he decided to write a children’s book
that he had outlined in a cahier notebook.

How hard could it be? He thought one night.
But it turned out to be very difficult to write.

Who knew there was a method to the silliness.
The Poet’s struggles made him a bit anxious.

He read How to Write Children's Picture Books.
And read a lot of children’s picture books.

After six months the manuscript was done
and [e]mailed to every agent in Manhattan.

Soon the rejection letters came in electronically;
And he lost hope of getting published quickly.

Seven years later a former student said,
What was the name of your MS I read?

upon an oak bookcase
in a Serif typeface.

She Camscanned Yes Day! into her iPhone
and sent the PDF which was almost a clone

of The Poet's unpublished book.
To which he said, "That crook stole my book!"

Dejected he said, “Well, back to poetry I go.
No, let's do a book on the history of espresso?”

Over six years ago, I let a supporter read The Role Model's MS. Days later, she handed it back to me and shook her head as if I had offered her a warm slice of slimy okra pie. For some reason, I didn't edit the MS. I didn't even ask her what was specifically wrong with my book, but I immediately sat down at a Mac and began writing Katie, my complemented but out-of-print second novel.