Can Flowers Help You Become a Better Writer? 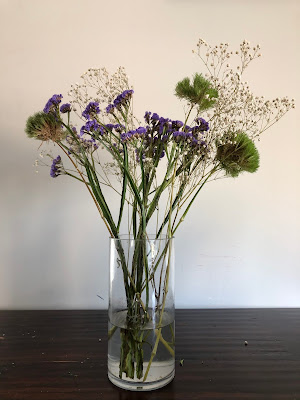 It turns out that having having houseplants or flowers may increase your concentration (i.e., make you a better writer).

Per Scientific American: In a study to be published in the Journal of Environmental Psychology, researchers show that the mere presence of plants in an office setting boosts one’s ability to maintain attention.

And Bio Advanced posted: A study at The Royal College of Agriculture in Circencester, England, found that students demonstrate 70% greater attentiveness when they're taught in rooms containing plants. 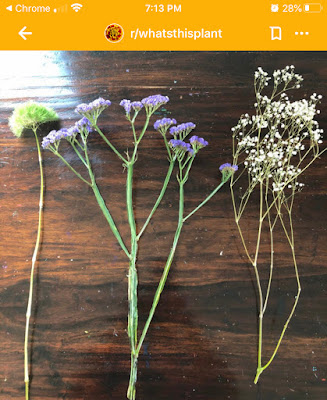 However, unlike Nabokov, we suck at identifying flowers; so, we did a post on Reddit's r/whatsthisplant and discovered that, from left to right, we have a vase from Trader Joe's of dianthus', statices and baby's breaths.
Posted by Mo Ibrahim at 12:12 PM No comments:

Due to you know what, the High Line is reservations only. Thus, I got an Eventbrite ticket for today at noon to see Sam Falls' Untitled (Four Arches), which is part of the High Lines' En Plein Air group exhibition that "examines and expands the tradition of outdoor painting."
Here's a description of the pieces from the High Line:
"For the High Line, Falls creates four ceramic archways supported by the steel rail tracks from the High Line’s original railway; each archway is dedicated to a different season in the park. For one year, Falls collected plants from the High Line, embedded them in ceramic, and fossilized them with colorful pigments." Nice.
Posted by Mo Ibrahim at 4:41 PM No comments: