Publishing Can Break Your Heart, But Don't Commit Suicide 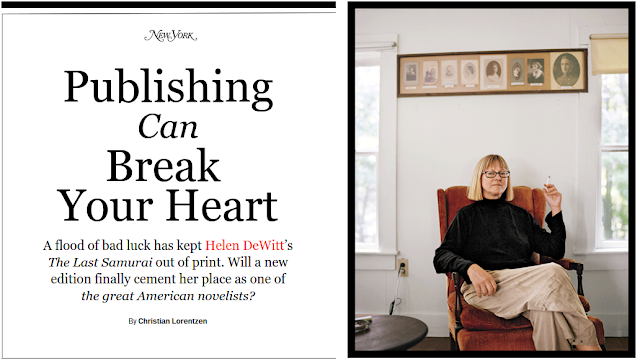 Christian Lorentzen wrote in her New York profile,"Publishing Can Break Your Heart",
that Helen DeWitt's stances that "Many, many writers are chronically broke. Many have a long list of grievances with the publishing industry" are "counterfactuals"; however, I would agree with DeWitt that there are many writers who are resentful towards the publishing industry and there are a number of writers who are penniless. For instance, DeWitt "donated $130 to the Bernie Sanders campaign. As he gained momentum, she tried to make another donation, but her credit card was refused."

Lorentzen's wrote that DeWitt's "The Last Samurai was a sensation even before it appeared. The toast of the Frankfurt Book Fair in 1999, with rights sold to more than a dozen countries, the novel came out in 2000 to wide acclaim, sold in excess of 100,000 copies in English, and was nominated for several prizes. But for DeWitt, this was the beginning of a long phase of turmoil that still hasn’t abated. The book’s success was marred by an epic battle with a copy editor involving large amounts of Wite-Out; typesetting nightmares having to do with the book’s use of foreign scripts; what she describes as “an accounting error” that resulted in her owing the publisher $75,000 when she thought the publisher owed her $80,000; the agonies of obtaining permissions for the many outside works quoted in the novel, including Akira Kurosawa’s The Seven Samurai — which was the title of The Last Samurai until it was deemed legally impossible. Her second novel, Lightning Rods, finished in July 1999, was then stuck in limbo after her publisher, Talk Miramax, folded. When it did finally appear, from New Directions in 2011, it garnered a legion of devoted readers too young to have read The Last Samurai before it went out of print."

DeWitt compared the publishing industry to the pharmaceutical trade. "The way drug companies suppress negative trial results in her view is similar to the way agents’ and editors’ failed deals are never reported, nor the way they stifle literary talent in the cradle. “There could be all these people out there having these ideas and being told, ‘No, no, no, no.’”

But DeWitt has taken her troubles with the publishing industry too far by having suicidal ideations. For example, "Once, after a book deal that she negotiated herself fell apart, she took a sedative and put a plastic bag over her head, but she couldn’t fall asleep. She sent an email to a lawyer asking that she ignore the previous email about disposing of her corpse. She went to Niagara Falls, but by the time she got there Reuters had reported her disappearance and a policeman picked her up on the street and took her to a hospital. Six years later, after the agent Bill Clegg failed to sell Lightning Rods to about a dozen publishers and resigned as her agent, she sent him a suicide email and set out to throw herself off a cliff near Brighton. She halted the plan after her ex-husband wrote saying he was expecting his first child with his second wife."

And DeWitt opined that editors may not be necessary. “Plato did not have an editor,” she said. “Plenty of writers that we admire struggled along somehow without the help of Michael Pietsch [the editor of David Foster Wallace's Infinite Jest].

DeWitt is correct that most full-time writers will never reach the net worth of J. K. Rowling and will have literary agents and publishers attempt to crush their dreams, but that's no reason to consider suicide. And having an editor look at your piece may not be a bad idea either.
Posted by Mo Ibrahim at 11:09 PM No comments: