Espresso and Latte - Before & After

Some Foods Are Too Good


There's a principle in Islam that when a man and a woman are (seemingly) alone, there's actually a third party in the room - Satan. This indicates that one should avoid being alone with an attractive woman, because it's extremely difficult to maintain self-control and not commit fornication or adultery.

Thus, an attractive woman should be viewed like an attractive piece like Rachel Whiteread at the MoMA. Take one admiring look but don't have a desire to take her home.

I would opine that the same principle applies to certain foods. Some foods are too good and one shouldn't be alone with them, because it would be extremely difficult to maintain self-control and not eat too much.

For example, purchasing a slice of chocolate ganache cake would be a better idea than taking an entire cake home, because it would be almost impossible not to eat more than three or even four slices.

Thus, to maintain optimal weight and health, I would advice against purchasing your favorites foods in bulk but limit yourself to a single serving.
Posted by Mo Ibrahim at 9:21 PM No comments: 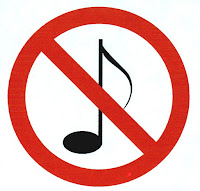 Boyd related in Vladimir Nabokov: The American Years that after a lecture at Spelman College, an African-American women's college in Atlanta, Georgia, Nabokov was invited to the chapel but, "he protested", because he "hated music and singing."

In a 1964 Playboy interview, Nabokov shared: "I have no ear for music [...] I am bored beyond measure by the motions of the musicians [...] But I have found a queer substitute for music in chess—more exactly, in the composing of chess problems."

And in a lecture on Kafka's "The Metamorphosis", Nabokov opined that music is primitive and animalistic compared to literature and painting, that music has a "[...] lulling, dulling influence [...]" and that Kafka shared his view that music was "stupefying, numbing, animallike":

Without wishing to antagonize lovers of music, I do wish to point out that taken in a general sense music, as perceived by its consumers, belongs to a more primitive, more animal form in the scale of arts than literature or painting.

I am taking music as a whole, not in terms of individual creation, imagination, and composition, all of which of course rival the art of literature and painting, but in terms of the impact music has on the average listener.

A great composer, a great writer, a great painter are brothers. But I think that the impact music in a generalized and primitive form has on the listener is of a more lowly quality than the impact of an average book or an average picture. What I especially have in mind is the soothing, lulling, dulling influence of music on some people such as of the radio or records.

In Kafka's tale it is merely a girl pitifully scraping on a fiddle and this corresponds in the piece to the canned music or plugged-in music of today.

What Kafka felt about music in general is what I have just described: its stupefying, numbing, animallike quality.

This attitude must be kept in mind in interpreting an important sentence that has been misunderstood by some translators. Literally, it reads “Was Gregor an animal to be so affected by music?” That is, in his human form he had cared little for it but in this scene, in his beetlehood, he succumbs: “He felt as if the way were opening before him to the unknown nourishment he craved.”