[...] if you’re an artist, you’re guilty of a crime: not that you’re aware, which is bad enough, but that you see things other people don’t admit are there.

This Baldwin quote reminded of a conversation I had with a colleague about The Allure of Nymphets, which is the book I was writing at the time about nympholepsy in pop culture.

I shared with my colleague that I was writing about an episode of HBO's and Jonathan Ames' Bored to Death where, in a effort to seduce a writer, Jonathan (Jason Schwartzman), a Saint Ann's High School student pretended to be a NYU student.

After fleeing the half-nude nymphet and her distraught father through a bathroom window, Jonathan realized that he left the copy of a movie script behind. 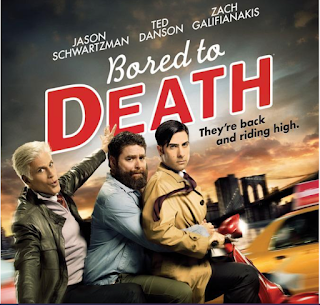 When Jonathan went to his best friend Ray (Zach Galifianakis) for advice on how to get the script back, Ray advised Jonathan to simply call the dad and ask for the script, which was reasonable advice, but Jason reminded Ray:

"She’s only 16-years-old!"
"You didn’t sodomize her did you?" Ray asked.
"No.” Jonathan responded.
"That’s too bad." Ray said despondently.

When I shared with my colleague, who was a fan of the show, that I was shocked by Ray's question and response, she said that she didn't remember that scene.
I suspected that she was lying, and Baldwin's quote raises my suspicion.
Posted by Mo Ibrahim at 6:03 PM

Email ThisBlogThis!Share to TwitterShare to FacebookShare to Pinterest
Labels: writer