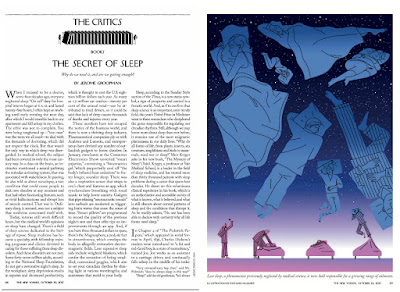 The October 23, 2017 issue of The New Yorker is packed with interesting articles. For example, Jerome Groopman's review, "The Secret of Sleep", of Meir Kryger's The Mystery of Sleep is particularly intriguing.

Kryger's question “Why do all forms of life, from plants, insects, sea creatures, amphibians and birds to mammals, need rest or sleep?” is particularly interesting when viewed through the lens of orthodox Muslims who believe that God doesn't get tired, rest or sleep.

Groopman writes: "[...] after we have been awake for about fourteen hours, and increases in intensity until the eighteen-hour mark, after which we find it hard not to fall asleep." That explains why, no matter how badly one wants to write, it becomes very difficult to write after being awake for 18 hours - especially if one sleeps five hours per night.

In addition, Groopman writes: "Reiss looks to the historian A. Roger Ekirch, who, in 2001, documented that in early-modern Europe and North America the standard pattern for nighttime sleep was “segmented.” There were two periods, sometimes termed “dead sleep” and “morning sleep,” with intervals of an hour or more when the person was awake, sometimes called “the watching,” during which people might pray or read or have sex. In some indigenous societies in Nigeria, Central America, and Brazil, segmented sleep persisted into the twentieth century. Ekirch hypothesized that segmented sleep was our natural, evolutionary heritage, and that it had been disrupted in the West by the demands of industrialization, and by electricity, which made artificial lighting ubiquitous."

Once again, this is particularly interesting to orthodox Muslims who perform Tahajjud [Arabic: تهجد‎‎].

Lastly, Reiss reminds: "Honoré de Balzac [...] was fuelling his writing with twenty to fifty cups of coffee a day, often on an empty stomach. Balzac believed that, with caffeine, “sparks shoot all the way to the brain,” and “forms and shapes and characters rear up; the paper is spread with ink.” Balzac typically wrote between fourteen and sixteen hours a day for two decades, producing sixteen volumes of “La Comédie Humaine” within six years."
Posted by Mo Ibrahim at 11:54 PM