Smoking May Increase a Writer's Concentration

A number of famous writers smoked while they wrote. For example, Moliere said, “Whoever lives without tobacco doesn’t deserve to live.” And Oscar Wilde related, “A cigarette is the perfect type of a perfect pleasure. It is exquisite, and it leaves one unsatisfied. What more can one want?”


And a study conducted by scientists at the Wuhan Institute of Physics and Mathematics under the Chinese Academy of Sciences found the writers may smoke because smoking may have the ability to "boost concentration and imagination". However, the researchers also found that "heavy smoking damages the brain overall".

Like Mark Twain and Freud, to possibly have the best of both worlds, you may want to consider giving up cigarettes like Andrey Vinelander, Ada's husband, who "had for years a two-pack smoker's fruity cough, but [...] when he spat a scarlet gob into his washbasin, he resolved to cut down on cigarettes and limit himself to tsigarki (cigarillos)."

...the Kaiser Medical Care Program, one of the nation's largest health care maintenance organizations, provided the answer in 1999 by publishing an excellent study on cigar smoking in the New England Journal of Medicine. They followed 16,228 never smokers and 1,546 cigar smokers - all men - for 25 years, and compared rates of several diseases among them.  Cigar smokers were divided into those smoking less than 5 cigars a day (let's call them moderate), and 5 or more (heavy).


The good news: Moderate cigar smokers had only a slightly higher risk for heart disease (RR = 1.2, CI = 1.03 – 1.4).  Those smoking fewer than 5 cigars daily had no significantly increased risks for stroke, emphysema, oral/pharynx cancer or lung cancer.

The comparable health risks of smokeless tobacco (ST), cigars and cigarettes are shown below.

Thus, just like with most things, moderation appears to be the key. It's advisable to smoke less than or equal to five cigars per day and not 22 like Twain. 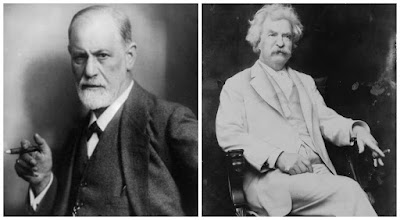 If you decide to smoke cigars while you write, I would additionally advise you to follow Mr. Bill's advice:

If you're concerned about the effects of smoking cigars on your stamina, Micheal Jordan shared the following in the July/August 2005 issue of Cigar Aficionado, "Not many people know about it. When they read this, they'll know that each and every day for a home game, I smoked a cigar. I wanted that feeling of success, and relaxation. It's the most relaxing thing." That's correct, the greatest basketball player to, thus far, ever play the game smoked a cigar before every home game. And he mentioned that before the interview he worked out after he had a cigar.


If you're a starving artist, you may want to smoke Macanudo Ascots cigarillos (i.e., mini cigars). They're more expensive (e.g., $18.95/10) than machine made cigars like Phillies and Garcia y Vegas, but they're less expensive than premium cigars, which can go for more than $18.95 for a single cigar.

(Phillies have a processed wrapper which according to Famous Smoke "are made from so-called sheet binder, a homogenized tobacco product in which large quantities of tobacco are broken down and reconstructed into a sheet of “tobacco paper,” as opposed to an actual tobacco leaf, which has been cured, fermented, and aged." Consequently, the Phillies "leafs" leaves an extremely strong tobacco smell on the hand(s). The Garcia y Vegas are made with a natural leaf wrapper, but the tobacco may be mixed with paper and other chemicals.)

It's important that one "toast" his cigar before (fully) lighting it, which in many cases is very difficult to do especially with the winds coming off the Hudson and East rivers. A butane wind resistant cigar lighter is a more realistic lighter for use outdoors. (Cigar aficionados swear by butane lighters, which they claim doesn't harm the taste of the cigar.) But a regular lighter will suffice.

Ranald Macdonald of Boisdale London:
How to Light a Cigar via The Wall Street Journal


Interestingly, Kipling's "The Betrothed" is a poem about a poet who decides to cancel his marriage ceremony after his fiancée forces him to choose between tying the knot and smoking cigars.

Lastly, 111-year-old Richard Arvin Overton is the oldest verified surviving U.S. World War II veteran, he is the oldest living man in the United States, and he, counter-intuitively, smokes twelve (12) cigars per day.