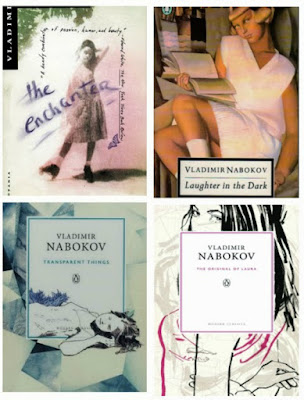 Readers of this blog are most likely familiar with Nabokov's Lolita, but they may not be familiar with his four other books that share a similar theme of hebephilia\ephebophilia with Lolita:


And some of Nabokov's published poetry contains the theme of hebephilia\ephebophilia. In “Lilith”, which can be found in his Selected Poems (2012), he wrote:
I died. The sycamores and shutters
along the dusty street were teased
by torrid Aeolus.

I walked,
and fauns walked, and in every faun
god Pan I seemed to recognize:
Good. I must be in Paradise.

Shielding her face and to the sparkling sun
showing a russet armpit, in a doorway
there stood a naked little girl.
She had a water-lily in her curls
and was as graceful as a woman. Tenderly
her nipples bloomed, and I recalled
the springtime of my life on earth,
when through the alders on the river brink
so very closely I could watch
the miller’s youngest daughter as she stepped
out of the water, and she was all golden,
with a wet fleece between her legs.

And now, still wearing the same dress coat
that I had on when killed last night,
with a rake’s predatory twinkle,
toward my Lilith I advanced.
She turned upon me a green eye
over her shoulder, and my clothes
were set on fire and in a trice
dispersed like ashes.

In the room behind
one glimpsed a shaggy Greek divan,
on a small table wine, pomegranates,
and some lewd frescoes covering the wall.
With two cold fingers childishly
she took me by my emberhead [пламя – i.e., erect penis]:
“now come along with me,” she said.

Without inducement, without effort,
Just with the slowest of pert glee,
like wings she gradually opened
her pretty knees in front of me.
And how enticing, and how merry,
her upturned face! And with a wild
lunge of my loins I penetrated
into an unforgotten child.
Snake within snake, vessel in vessel,
smooth-fitting part, I moved in her,
through the ascending itch forefeeling
unutterable pleasure [восторг – i.e., approaching orgasm] stir.
But suddenly she lightly flinched,
retreated, drew her legs together,
and grasped a veil and twisted it
around herself up to the hips,
and full of strength, at half the distance
to rapture [блаженству - i.e., orgasm], I was left with nothing.
I hurtled forward. A strange wind
caused me to stagger. “Let me in!”
I shouted, noticing with horror
that I stood again outside in the dust
and that obscenely bleating youngsters
were staring at my pommeled lust [булаву – mace i.e., erect penis].
“Let me come in!” And the goat-hoofed,
copper-curled crowd increased. “Oh, let me in,”
I pleaded, “otherwise I shall go mad!”
The door stayed silent, and for all to see
writhing in agony I spilled my seed
and knew abruptly that I was in Hell.
(The words in the brackets are from Maxim D. Shrayer's Russian Literature journal article "Nabokov's Sexography".)

Nabokov shared in Poems and Problems that “Lilith” was composed “to amuse a friend.” In Pniniad, Marc Szeftel, whom many claim was the model for Nabokov's Pnin, shared an anecdote that was related to him by Gleb Struve, an associate of Nabokov:


“Struve tells about a private evening devoted to Nabokov's erotical (or even pornographical) poetry, read by him. Of these poems only “Lilith” has been published in N.'s 'Poems and Problems'...This reading happened when N. was not yet married...What was on young Nabokov's mind before he married Vera, I do not know. Probably, quite a few frivolous things, to expect from a very handsome, young Russian.”

Maurice Couturier revealed in Nabokov's Eros and the Poetics of Desire that different versions of last six lines of  “Lilith” were used "...throughout Nabokov's novels which may suggest that he, as an author, was probably reenacting an event belonging to his own past or a fantasy he had nursed."

And who was one of Nabokov's favorite painters? Based on my leading question, you may have been able to guess none other than Balthus. Nabokov shared in In Strong Opinions, "The aspects of Picasso that I emphatically dislike are the sloppy products of his old age. I also loathe old Matisse. A contemporary artist I do admire very much, though not only because he paints Lolita-like creatures, is Balthus." Furthermore, Eric Naiman wrote in Nabokov, Perversely that a painting in Pnin, "Hoecker's 'Girl with a Cat'", may have been a reference to Balthus' "Jeune Fille au Chat".

Nabokov was asked in a 1964 Playboy interview, "Are there any contemporary authors you do enjoy reading?" Nabokov replied, "I do have a few favorites—for example, Robbe-Grillet and Borges. How freely and gratefully one breathes in their marvelous labyrinths! I love their lucidity of thought, the purity and poetry, the mirage in the mirror."

Unsurprisingly, Robbe-Grillet writes about nymphets too. Here's an exemplary excerpt from his Recollections of the Golden Triangle [French: Souvenirs du Triangle d'Or]:

To celebrate her 17th birthday, Caroline's father took a whole box at the Opera House. Caroline was commanded to face the stage while straddling two armless red-velvet chairs before her father "...pressed himself shamelessly against her buttocks in order to caress her in greater comfort...The insidious fingers are no longer satisfied with stroking...They pass back and forth in wave after wave, tirelessly, over the bivalvular lips...One tiny, fragile rock resists and stiffens..."

And what about Aleksandr Pushkin, who was one Nabokov's favorites poets. The Paris Review revealed that Nabokov spent two months in Cambridge working on the English translation and commentary of Eugene Onegin for over 17 hours per day. In the novel in verse, the poet Lensky invited 26-year-old dandy Eugene Onegin to dinner with his fiancée, the nymphet Olga, and her family. During the dinner Tatyana, Olga's 13-year-old older sister, became very infatuated with Onegin but her innocent love for the older man was (initially) unrequited.

Wait. Let's not forget about Nabokov's short stories. According to Naiman, Nabokov wrote “Skazka” in 1926 before it was published in Rul', a Berlin emigre newspaper that was founded by his father. In the story, on his ride to work, Erwin habitually gazes through the tram's window and picks girls for his imaginary harem. However, the young man gains the opportunity for his dreams to come true after he meets Frau Monde, a female Devil who promises Erwin that he can have all the girls he wants upon “cushions and rugs” in “a villa with a walled garden” but that it's “essential and final” that he selects an odd number of girls between noon to midnight.

“[T]wo young ladies-sisters, or even twins...Both were small and slim...with saucy eyes and painted lips.” Erwin referred to the Twins as “Gay, painted, young things.”

A lady who “...was lovely, hatless, bobhaired, with a fringe on her forehead that made her look like a boy actor in the part of a damsel.

A “beautiful in a drab, freckled way” wench who worked at a cheap restaurant that Erwin frequented on Sundays.

Four girls in jerseys and shorts, “...magnificent legs, naked nearly up to the groin...” inside the amusement park's arcade.

“A child of fourteen or so in a low-cut black party dress .” She was walking with a tall elderly man who was a “...famous poet, a senile swan, living all alone in a distant suburb”

I won't reveal who last girl was, but I will share her response to Erwin which was, “You ought to be ashamed of yourself...Leave me alone.” Her response was due to “...that which changes a man's life (i.e., genital) with one divine stroke...”

When Nabokov translated the story before it was published in Playboy (1974) and Details of a Sunset (1976), he aggressively titled it “A Nursery Tale” and noted in Tyrants Destroyed and Other Stories that when he was translating the story he was “...eerily startled to meet a somewhat decrepit but unmistakable Humbert escorting his nymphet in the story I wrote almost half a century ago.”

Thus, was Nabokov a hebephile\ephebophile? Clearly, he was and according to Matt Ridley's New York Time's Notable Book The Red Queen all men are. But did Nabokov ever have an age-discrepant relationship? We may never know.

(A number of Nabokov's other works are peppered lightly and liberally with references to nymphets. I would refer the reader to Naiman's Nabokov, Perversely and Couturier's Nabokov's Eros and the Poetics of Desire.)