The White Woman: A Root of Segregation 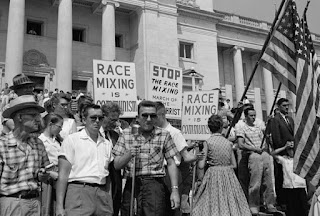 If not the root, a root of segregation is the vehement objection to interracial relationships.

Klan violence was needed to “keep the niggers in their place,” explained Confederate general Nathan Bedford Forrest, the Klan’s first honorary “Grand Wizard.” To the Klan, the only thing worse than a Negro was “a white Radical.” But the worst offender was a suspected Black rapist of a White woman. Klansmen glorified White womanhood as the epitome of honor and purity [...]

And Robert Beck wrote in his memoir, Pimp: The Story of My Life:

Greenie, the white man [...] locks all Niggers inside tight stockades [i.e., in prisons and segregated neighborhoods]. He’d love it if the Nigger broads wasn’t locked in there. The white man is scared shitless. He don’t want them humping bucks [i.e., oversexed Black men] coming out there in the white world rubbing their bellies against those soft white bellies [...] That’s the real reason for keeping all the Niggers locked up.

Arguably, the most famous example of the fear of interracial relationships is the Emmett Till case. August 28, 1955, 14-year-old Till, an African-American, was kidnapped, pistol whipped, beaten, shot in the head, and tossed in a Mississippi river by two white men - Roy Bryant and J.W. Milam. What did Till do to Bryant and Milam?  He didn’t anything to them, but they believed that Till did something to Carolyn Bryant, Roy Bryant’s 21-year-old white wife.

[...] the events leading to the attack has repeatedly shifted. One account had the boy only insulting her verbally. In court, but without jurors present, she claimed that Emmett had made physical contact with her and spoken in crude, sexual language. She later told the F.B.I. that Emmett had touched her hand.

But when she spoke to the researcher Timothy B. Tyson in 2008, she acknowledged that it was “not true” that Emmett had grabbed her or made vulgar remarks. She told Dr. Tyson, who published a book about the case last year [The Blood of Emmett Till, a New York Times bestseller and National Book Award Longlist], that “nothing that boy did could ever justify what happened to him.”

However, Christopher Benson’s Chicago magazine piece, "Eyewitness Account: Emmett Till's cousin Simeon Wright seeks to set the record straight", Simeon Wright, Till’s cousin, said that Till whistled at Bryant, “[...] to get a laugh out of us or something.”

Even housing African-Americans in nearby low-income projects was unacceptable to some whites. In The Color of Law: A Forgotten History of How Our Government Segregated America, Richard Rothstein wrote:

[...] the Reverend Constantine Dzink, pastor of the King Catholic Church, wrote in opposition to the United States Housing Authority building the Sojourner Truth public housing project for African American families in Detroit [in 1941]: The “construction of a low-cost housing project [...] would jeopardize the safety of many of our white girls.”

And most recently, what did John Kovach Jr., a white Lorain, Ohio police officer, do after he discovered this past summer that his 18-year-old daughter had brought to life one of his greatest nightmares, per Katie Nix’s article in the The Chronicle-Telegram and a video, he “[...] he abused his authority by conducting a traffic stop on his daughter’s [African-American] boyfriend without cause and temporarily detained his daughter and her boyfriend in the back of his squad car.” And Kovach threatened to frame the African-American teen. “Have a seat in my car. We’ll make (expletive) up as we go.” Obviously, the segregated neighborhoods in Lorain weren’t working; thus, Kovach tried the second method of keeping white women away from African-African men - prison.

Klansmen religiously believed that Blacks possessed supernatural sexual powers, and this belief fueled their sexual attraction to Black women and their fear of White women being attracted to Black men. It became almost standard operating procedure to justify Klan terrorism by maintaining that southern White supremacy was necessary to defend the purity of White women.

Interestingly, (some) white men feared that white women would be attracted to Black men due to their "supernatural sexual powers"; thus, Klansmen condoned segregation as a way to prevent white women from seducing Black men.


In The Guardian, David Olusoga wrote in his review of Stamped from the Beginning:

The causal thread of American racism, Kendi suggests, runs in the opposite direction to the way we normally presume. Racist ideas [e.g., oversexed African-American males] are manufactured to justify racial policy [e.g., segregation of white women]. 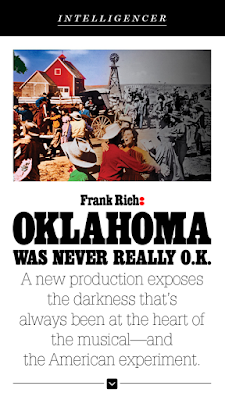 [...] the most lethal race riot in American history [took place in Oklahoma]. The match that sparked the flames was the usual — a black man was falsely accused of sexually assaulting a white woman. The official death toll was 36, but a 2001 study corrected it to between 100 and 300. All but one of the neighborhood’s blocks were destroyed, including nearly 1,300 homes and almost 200 businesses; some 8,000 residents were rendered homeless. Much as whites had looted the possessions of Indians evicted under the Indian Removal Act some 70 years earlier, so white Oklahomans helped themselves to the bounty of Greenwood’s affluent households. The culprits were let off as Curly was, no doubt under some spurious rationalization of “self-defense.”

That conflagration was still within recent memory at the time Oklahoma! arrived on Broadway in 1943. Or would have been had it not been purged from the record. And I mean literally purged. The dead were tossed into the Arkansas River and unmarked mass graves. News accounts were cut out of the Tulsa Tribune before they were assembled into bound reference volumes. The incident was not a part of the Oklahoma public schools’ curriculum until 2000, and only recently entered American-history textbooks. Any physical remnants of that 1921 inferno had long since been bulldozed by the time I passed through.

Posted by Mo Ibrahim at 1:07 PM No comments: