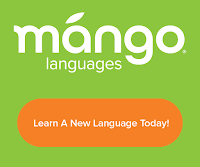 Students of French tend to find it difficult to pronounce the Romance language; however, Mango Languages' English transliterations have made that aspect of learning French a lot easier.

Mango Languages, which I highly recommend, isn't free, but it's free if you have a New York Public Library card.

(Disclaimer: This is not a paid endorsement.)
Posted by Mo Ibrahim at 9:10 PM No comments:

Joyce Maynard shared in At Home in the World: A Memoir the following conversation she had with Salinger. (Salinger and Maynard had a 10-month age-gap affair that began when Maynard was 19 and a freshman at Yale.)

Joyce said, “I wish, instead of writing, that I could play an instrument.”

Salinger responded, “Don’t ever suppose it’s some kind of lesser art form […] because nobody’s lined up outside some […] club full of people in turtlenecks waiting to hear you transport them into some other orbit of pure ecstasy.”

Maynard said, referring to a Jazz performance, “They were inventing everything. Right on the spot.”

But Salinger explained that what Joyce assumed was improvisation were “virtuoso effects” from the (jazz) musicians “repertoire”.

Maynard opined that being a musician “looked like so much more fun than” writing to which Salinger exploded:

“Fun! Not much fun in writing […] No notes on a page for us to fall back on. No amazing orgasmic rhythms to make the audience melt. Not one goddamn thing to do with the body, except to try whenever possible to ignore one’s own cursed immobility. God, the unnaturalness of writing. And unlike performing music, it never gets any easier, no matter how much you do it. Every damned time we sit down to work, it’s that same blank page again. A person could have a better time at a Doug McLure retrospective."
Posted by Mo Ibrahim at 6:59 PM No comments: